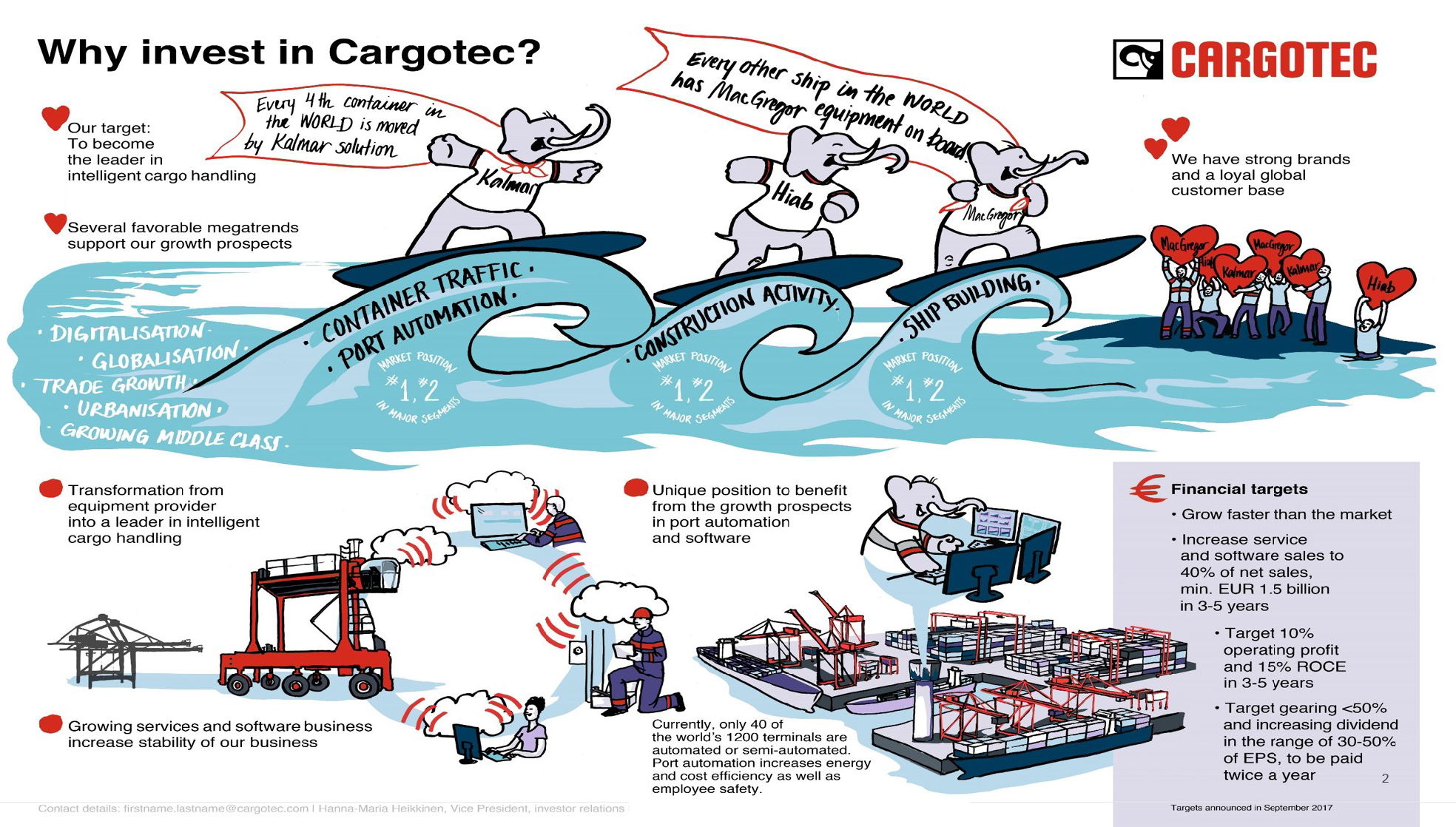 The fourth quarter of 2020 is behind us, and we would like to remind you of some of the quarter's most important events. Cargotec’s Financial Statements review 2020 will be published on Thursday, 4 February 2021, and the silent period will commence on Thursday, 14 January 2021. If you would like to book a call with us before our silent period, please contact Tiina (tiina.aaltonen@cargotec.com).

Cargotec Corporation will disclose the following financial information in 2021:

Cargotec's Financial Statements 2020 and Annual Report 2020 will be available at www.cargotec.com on week 8.

The Annual General Meeting of Cargotec Corporation will be held on Tuesday, 23 March 2021.

On 18 December, Cargotec’s Extraordinary General Meeting resolved to approve the merger of Cargotec and Konecranes and the resolutions relating to the merger proposed to the general meeting. See below for more information about the merger.

On 3 December, we announced that Cargotec the Board of Directors has decided to initiate the actual sales process of Navis. We had earlier announced that we are evaluating the strategic options of Navis, which would include new ownership structures or a potential sale of Navis software business.

Also on 3 December, we announced that the Finnish Financial Supervisory Authority has approved the merger prospectus concerning the combination of Cargotec and Konecranes.

On 28 October, we announced that the Board of Directors has decided to establish a new share-based incentive programme for the Group key employees. The new Restricted Share Unit Programme 2020 is intended to function as a bridge programme for the transition period before the closing of the Transaction and forming the combined company in the merger.

On 9 October, we announced that the judicial process concerning Cargotec has been completed in the US. The claim was based on Cargotec allegedly having breached confidentiality obligations related to the negotiations. On 2 October 2020, the Supreme Court of Texas denied Cargotec’s opponent’s Petition for Review.

On 1 October, we announced that Cargotec's and Konecranes' respective Boards of Directors had signed a combination agreement and a merger plan to combine the two companies through a merger. More information about the merger.

Read about our strategy progress in 2020

On 8 December, we held a virtual sell side analyst call. In the call, Cargotec's CEO Mika Vehviläinen discussed Cargotec's and Konecranes' 1 October announcement and answered the participants' questions, among others.

Investor activities and events during Q4 2020

During Q4, our investor meetings have been virtual meetings where we have convened online and shared material virtually. Even though we miss meeting you in person and having informal discussions on the road, according to your feedback and participation the virtual meetings have worked well, and we thank you for your support and cooperation.

While the coronavirus situation prevails, we continue with high safety standards, following the regulatory travel and social restrictions.

Have a look at our videos

We created several videos during the quarter, and focused particularly on MacGregor.

The most important events of the Q4 2018 can be found from the below newsletter.

Cargotec Corporation will disclose the following financial information in 2019:

Other announcements during Q4/2018

During the fourth quarter, MacGregor received clearances from both German and South Korean competition regulators for the acquisition of the marine and offshore business of TTS. MacGregor is still waiting for the approvals from the authorities in China, and that is why TTS acquisition is expected to close in Q1 2019. MacGregor earlier announced that it expects to receive all the needed approvals by the end of 2018 and to complete the transaction, according to the agreement, as soon as possible thereafter.

On 7 November, Cargotec announced it had issued Schuldschein loans in the amount of EUR 150 million. The transaction included floating and fixed rate tranches with maturities of 5 and 7 years. The Schuldschein loans were targeted to banks and institutional investors, with the proceeds going towards general corporate purposes, including refinancing and acquisitions.

On 21 December, Cargotec announced it had won its appeal in the USA to dispute a USD 13 million verdict of damages. In October 2016, Cargotec received a verdict of damages of USD 13 million in the USA in a local jury trial in Hempstead, USA. The verdict was related to business acquisition negotiations Cargotec USA had in 2010 and 2011. The negotiations were closed without results. The claim was based on Cargotec allegedly having breached confidentiality obligations related to the negotiations.

On 30 October, Cargotec announced MacGregor and China State Shipbuilding Corporation (CSSC) had signed a Letter of Intent (LOI) on strategic cooperation. MacGregor sees that this cooperation will further strengthen its presence in Asia and specifically in China, the world's biggest shipbuilding market. CSSC is a very important partner for MacGregor, as it is the primary shipbuilding group in China and well positioned as a global leader in the industry. The LOI relates to MacGregor's planned acquisition of the marine and offshore businesses of TTS Group and future cooperation potential between the two groups.

During the quarter, Cargotec announced it had made two major investments to support digitalisation and innovation capabilities. On 20 November, Cargotec announced it will invest EUR 32 million in accelerating the development of digital solutions to secure growth of new digital business. As part of the investment, Cargotec will open a new Digital Solutions Hub in Tampere, Finland. On 22 November, Kalmar announced it had officially inaugurated its new Innovation Centre in Ljungby, southern Sweden. Approximately 200 people will be based at the state of the art facility that has been designed to support new collaborative ways of working with modern architecture and cutting edge technology.

On 27 December, Cargotec announced the change of auditor. The Finnish Patent and Registration Office had designated Markku Katajisto, Authorised Public Accountant, as the company's statutory auditor for the financial year 2018, with the role taking effect immediately. Markku Katajisto will replace Tomi Hyryläinen as the company's auditor, as Tomi Hyryläinen has on 20 December 2018 announced his resignation from this position.

On 6 November, Hiab announced it had completed the acquisition of Effer S.p.A. from CTE Group. Signing of the transaction was announced on 31 July 2018.

On 19 December, Cargotec announced it will start to repurchase its own shares. Between 20 and 28 December, a total of 160,000 own shares were repurchased. There was also a purchase of 40,000 shares on 2 January 2019. The total price of the purchases was 5,507,796.00 euros. Cargotec Corporation now holds a total of 419,603 shares including the shares repurchased in December and January. Read more details about the repurchase on Cargotec’s Investors webpage.

Investor activities and events during Q4 2018

During the fourth quarter, Cargotec organised an investor event in Singapore in cooperation with KONE and Kemira. Cargotec hosted its part of the two-day event on 31 October, and the programme consisted of presentations given by Peter Cederholm, President of Bromma and Michel van Roozendaal, President of MacGregor. There was also a visit to PSA Singapore, the second largest container port in the world. Read a blog post of the event, watch video recaps or take a look at the material from the event here. 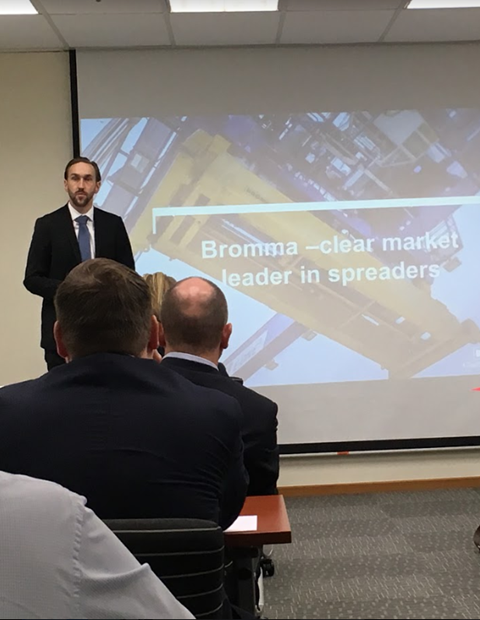 Take a look at the consensus estimates.

Come to meet Scott Phillips, new president of Hiab, on 27 February 2019 in Helsinki.

Take a look at our IR calendar for other upcoming events and roadshows in 2019.

Cargotec organised an investor event in Singapore in October 2018. In the below videos, MacGregor President Michel van Roozendaal as well as Bromma President Peter Cederholm tell about their businesses. The videos have English subtitles.