Journey towards a new MacGregor

On 21 May, Cargotec Investor Relations organised an event in Helsinki where MacGregor’s president Michel van Roozendaal gave a presentation about MacGregor. In addition, Karoliina Loikkanen, Director, Sustainability, spoke about sustainability at Cargotec. Another blog of sustainability part of the event will be published soon.

Offshore's share is the biggest of the order backlog (Q1/18) 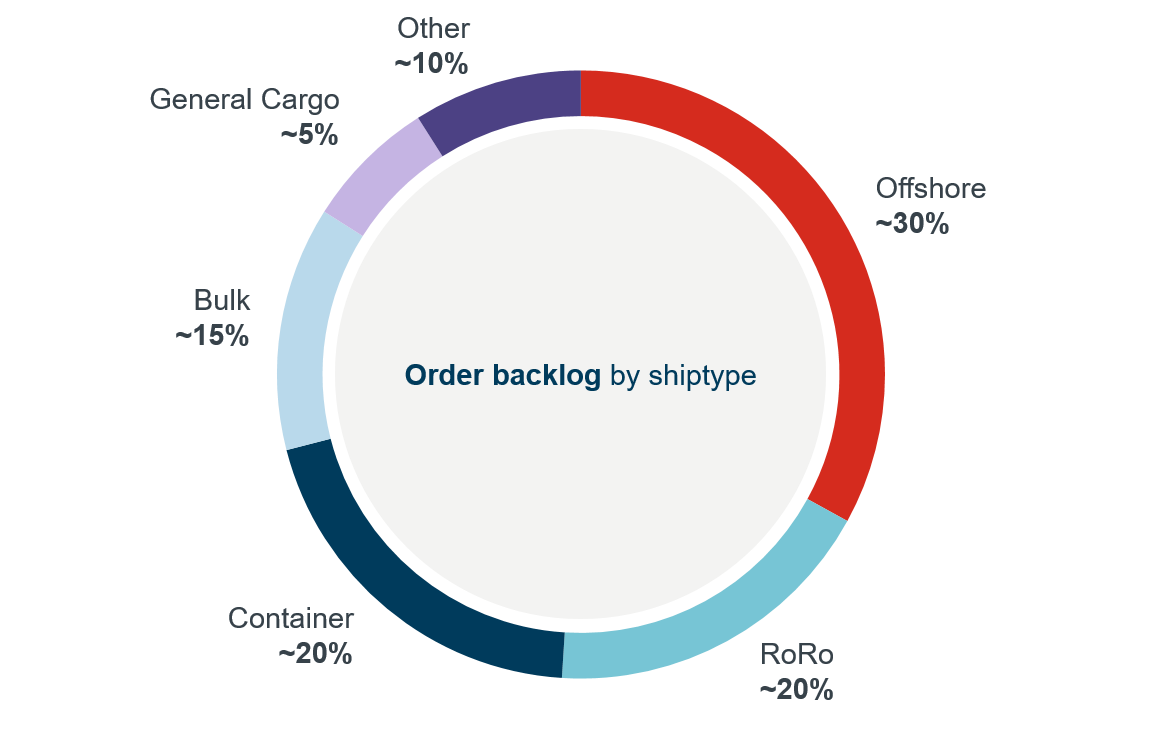 The market situation both in merchant and offshore sector has been challenging during the recent years. However, due to successful cost management, MacGregor’s operating profit has remained at black figures. Fortunately, so far it seems that the market has started to slowly recover. MacGregor’s orders received reached the lowest level already in Q4 2016. In merchant sector, positive global economic growth, robust world trade growth and merchant fleet demand/supply improvement is driving improving market fundamentals. In offshore, however, there are positive fundamentals in place, but recovery has been challenged as the vessel oversupply remains.

Furthermore, it is important to note that as MacGregor’s business is a long-lead business, the effect of the market recovery will not materialise in sales growth soon. For example, around half of the current (Q1/18) order book will be recognised in 2019 or even after that. That is because lead times from ship contracts to MacGregor orders are around 6-18 months, and after the order has been received, it can take another 6-18 months until the order is fully recognised as revenue.

Thanks to Cargotec’s strong balance sheet, we have been able to make some successful acquisitions during recent years. For MacGregor, there have been two recent acquisitions: the ones of Rapp Marine and TTS (TTS is still pending for regulatory approvals).

The ambition with acquiring Rapp Marine was to strengthen the foothold at Fishery and Research segments. MacGregor has had a positive start with Rapp Marine, and it has fulfilled the expectations of the business case and our plans. In Q1/18, Rapp Marine’s consolidated sales totalled around EUR 8 million, whereas MacGregor’s total sales in Q1/18 were EUR 126 million. We believe that buying Rapp Marine was a good strategic move, as Fishing vessel market outlook looks positive. In fishing vessel fleet, ongoing replacement of the ageing fleet is currently taking place.

The ongoing acquisition of TTS, in turn, is proceeding as planned. The enterprise value of the acquisition is EUR 87 million, and the businesses to be acquired represent around 90% of total sales of TTS Group. The strategic rationale for buying TTS come from increasing service growth potential, strengthening MacGregor’s position in China, and from potential cost synergies, estimated to be around EUR 30-35 million on annual level. 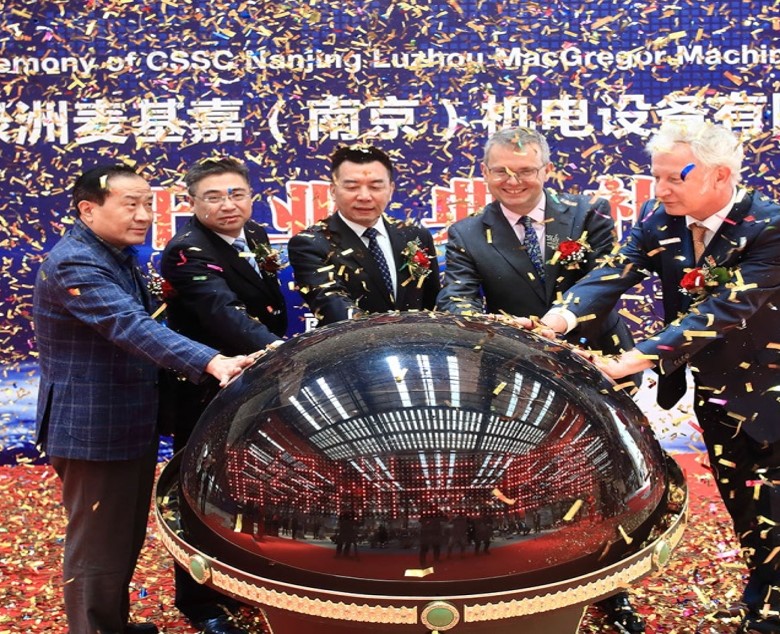 As said, along with TTS, MacGregor would be able to strengthen its position in China. Having foothold both in China and in whole Asia is important. That is because China is the leading shipbuilding country in the world with determination to further strengthen its global position, and more than 75 % of global shipbuilding takes place in Asia. In order to be closer to customers in Asia, MacGregor has moved its head office to Singapore, which is a strong international maritime hub. China State Shipbuilding Corporation (CSSC) and China Shipbuilding Industry Corporation (CSIC) are the two major state-owned ship building companies, dominating the shipbuilding market. In April, MacGregor opened its first joint venture with a state-owned enterprise, and TTS has altogether three strategic joint ventures with both CSSC and CSIC.

Progress in strategic must-wins and Q&A

Finally, Roozendaal presented that strategic must-wins are processing well at MacGregor. MacGregor Smart, initiative for gathering and utilising data, is an evidence of benefitting from the opportunities of digitalisation. Service business has been relatively stable especially in the merchant sector, and highlights for this year include a launch of Design to service concept. In addition, service centre in Poland, which was opened in 2017, has been able to harmonise processes between different countries. MacGregor has also taken steps in automation: for example, autonomous discharging cranes for bulk ships has been recently developed.

Throughout the whole event, participants were active and asked questions. Especially the acquisition of TTS was an area of interest as the attendees asked about TTS’ synergies, geographical presence, and about TTS’ joint ventures in China. There were also questions about strategic must-wins, for example about service business’ growth prospects and market shares, and MacGregor’s competition in digital solutions. All in all, we got good feedback of the event as it helped participants to deepen their understanding of MacGregor. 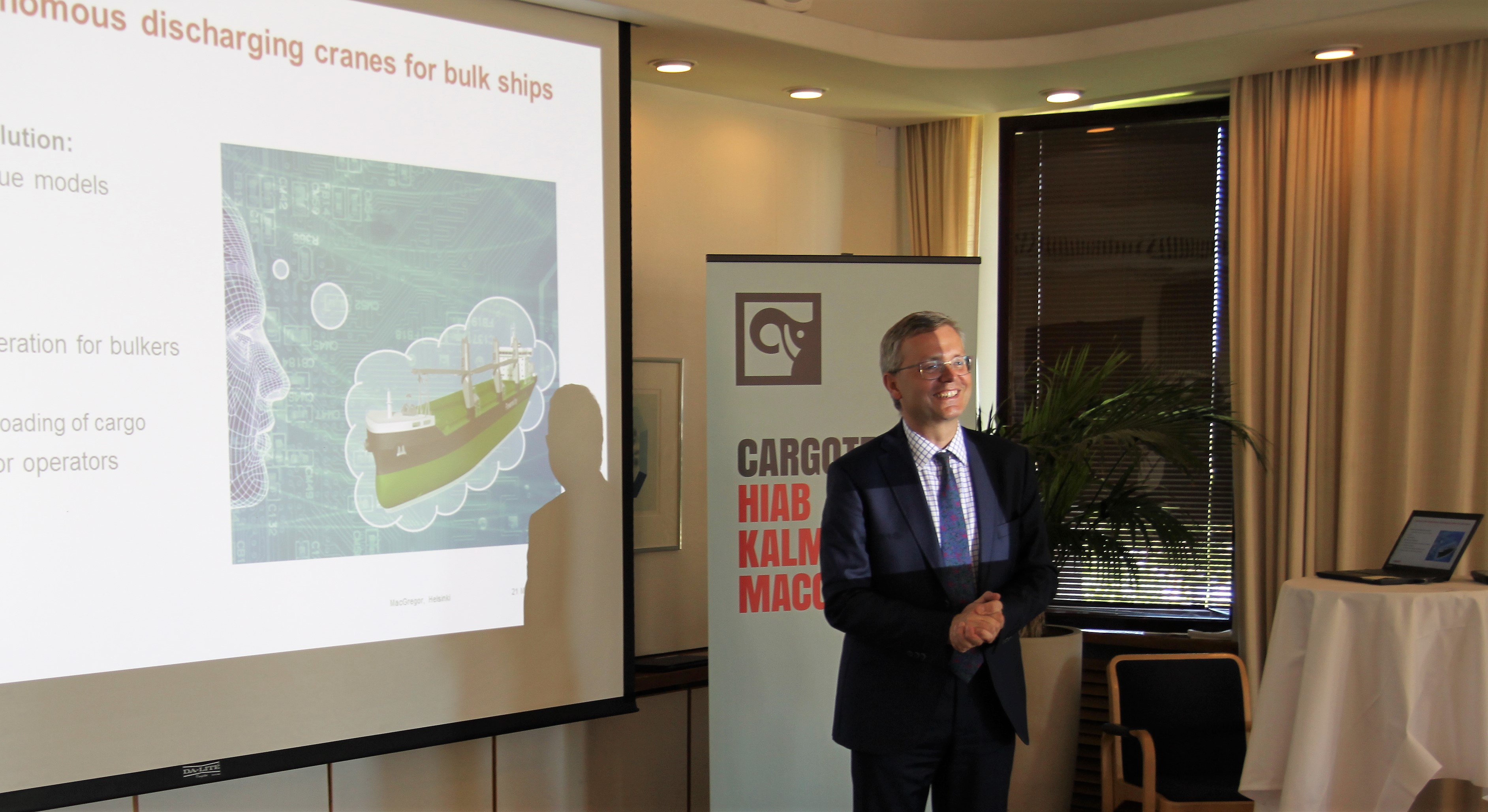